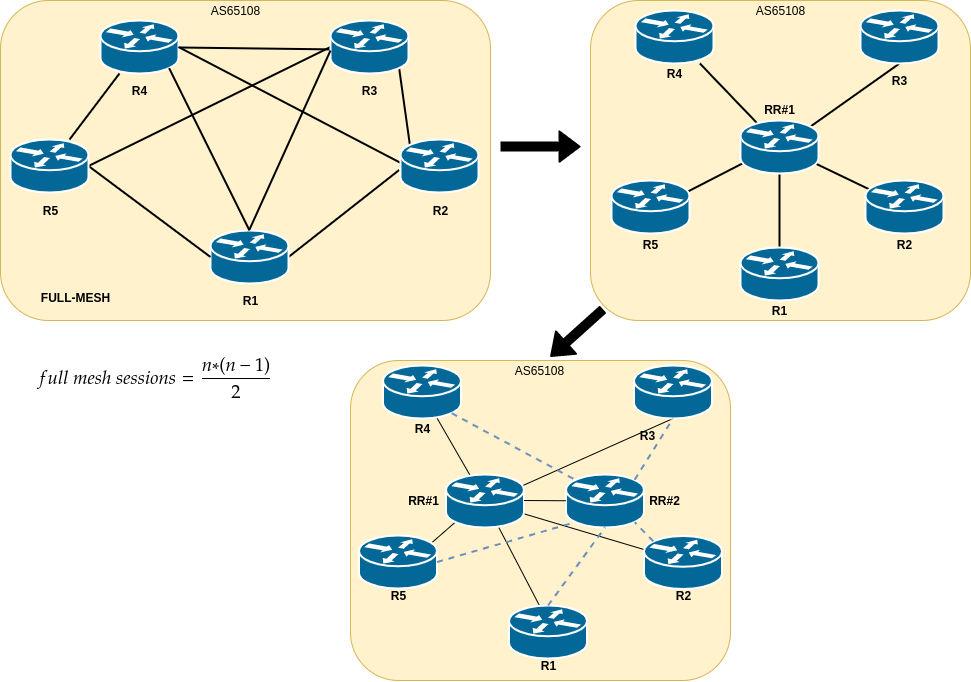 BGP protocol is de-facto ubiquitous today. It was devised for ISP/IX/WAN but lately it started to be used on large LANs. There are 2 modes of BGP: eBGP and iBGP. eBGP is used between autonomous systems. iBGP is used inside the autonomous systems. We chose to implement iBGP for VLAN (in L2) / VRF (L3) and eBGP for routing between those separated internal networks. We can do that because traffic between internal networks is not large and we are filtering/firewalling it. Predefined-AS number is used for servers and switches included in the network (for VLAN in L2 or for VRF in L3). This way the network becomes a fully Autonomous System.

n is the number of devices.

RR (Route Reflector) can propagate iBGP routes to peers, hence a full mesh of iBGP peers is not necessary. With network scaling-up, adding new peers will require only peering (SONiC Switches or L2 servers) with 2 x route reflectors. Both RR act as active ones (active-active solution) to provide redundancy along with multipath routes. Please be aware: route reflectors are not routers per se! They are only “reflecting” NLRIs (prefixes+attributes) to the connected clients - IP traffic is not forwarded nor passed by them directly. We use FRR demons to implement RRs.

Peering route reflectors between each other

There needs to be intra-connection between pair of two route-reflectors to avoid split-brain case.

Each L3-BGP-enabled SONiC switch needs to be connected to the RR. We are using BGP-L3 peer group specifically for this purpose.

Each old L2-based host needs to be peered with RR.

Connecting ‘legacy-old’ servers to the RRs

Each server which is connected to the old big flat /12 network needs to peer with RR first, in order to be able to connect to the new L3-BGP-only-servers. When iBGP peering is established, route-reflector would advertise NLRIs to its client-peer without modifying attributes - the aim is to avoid routing loops. We have a smooth experience with a BIRD routing daemon - configuration file is human-readable and can be easily automated using tools such as Puppet or Ansbile. 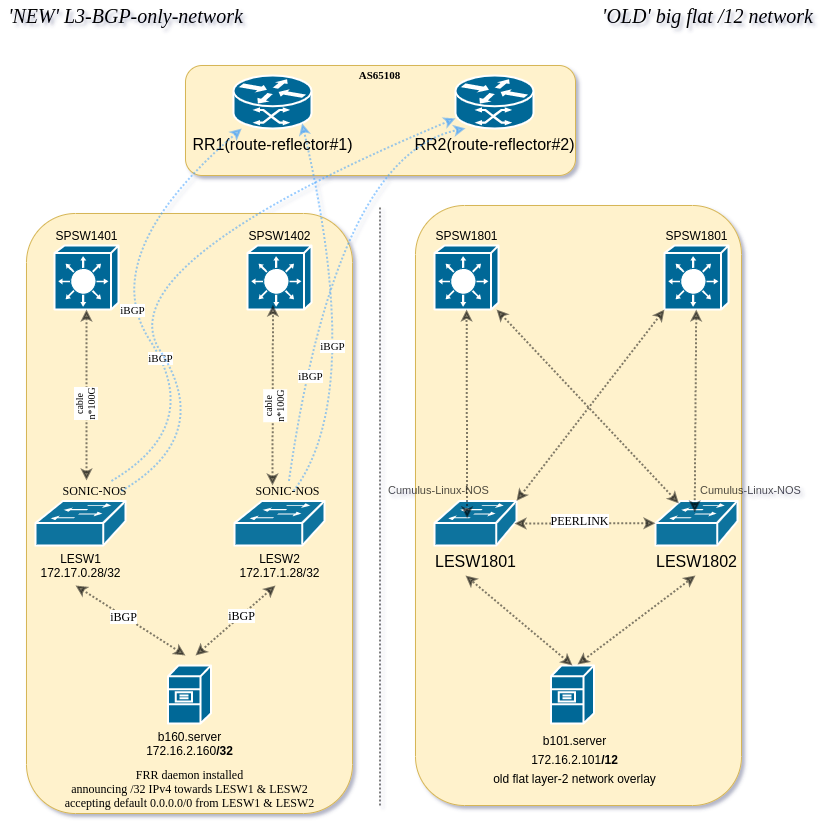 As you can see each ‘old’ server has a 2 iBGP sessions and it’s receiving over 722 NLRIs (prefixes+attributes).

These 722 prefixes include predominantely /32 IPv4 routes - for each ‘new’ L3-BGP-based-server is annoucing exactly 1 x IPv4 addr towards RRs.

BGP-table (also known as BGP topology table, BGP RIB) on ‘old’ servers is looking like this:

FIB-table (Forwarding Information Base) on the ‘old’ servers is looking like this:

Network path from b101 (server) to b160 (server) and the other way goes via SONiC LEAF:

Connecting ‘new’ L3-BGP-switches to the RRs

Each odd-numbered leaf switch is connected directly via LACP portchannel to the odd-numbered spine switch e.g. LESW#1 to SPSW#1 and LESW#2 to SPSW#2 using multiple 100G interfaces. VLAN interface is assigned to the PortChannel0001 interface:

On the other side (SPSW) of PortChannel we are extracting VXLAN to VLAN (Cumulus-Linux-NOS config):

You can see VLANs configured on lesw1 below:

As you can see this is demarcation point between old flat L2 EVPN-based network and the new L3-BGP-only based hosts.

The amount of traffic is constatly growing and our setup allows scaling-up. We have interconnection consisting of 16x100Gbit/s ports coupled between each Spine and Leaf pair giving 3.2Tbit/s total BW - but please be aware that we can scale up as we grow! Now our biggest bandwidth-consuming DB cluster is using around 600Gbit/s at its peak and still growing! Each server of this cluster is serving flawlessly over 70Gbit/s TCP traffic! 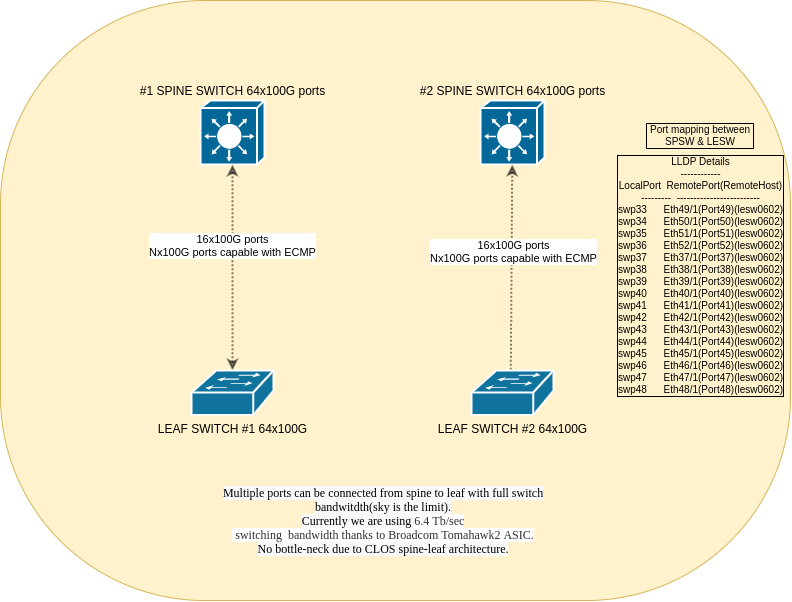 We are connecting spine and leaf with multiple 100G ports - currently each leaf is connected via 16x100G ports but the sky is the limit and de-facto switchport numbers! Interconnect can be done at any level: e.g. leaf to leaf, leaf to spine and leaf to super-spine - possible point of connection: anywhere (L2/L3 boundary). No bottle-neck due to CLOS spine-leaf architecture. A CLOS/Spine-Leaf or “fat tree” architecture features multiple connections between interconnection switches (spine switches) and access switches (leaf switches) to support high-performance computer clustering. In addition to flattening and scaling out Layer 2 networks at the edge, it also creates a nonblocking, low-latency fabric.

Equal-cost multi-path routing (ECMP) is a routing feature where instead of traditional one next-hop exists per prefix there are multiple next-hops in use at the same time. Packet forwarding to a single destination takes place over multiple “best paths” in parralel simultaneously. The ECMP leverages modified Dijkstra’s algorithm to search for the shortest path, and uses the modulo-n hashing method in the selection of the delivery path. To prevent out of order packets, ECMP hashing is done on a per-flow basis, which means that all packets with the same source and destination IP addresses and the same source and destination ports always hash to the same next hop thus traffic will be uniformly spread across next-hops(load-balancing effect). Hashing is computed with 5-tuple:

You can read more about hashing in excellent Broadcom document here.

Below is example output of one IP (/32 prefix) which is fully-reachable over six next-hops: 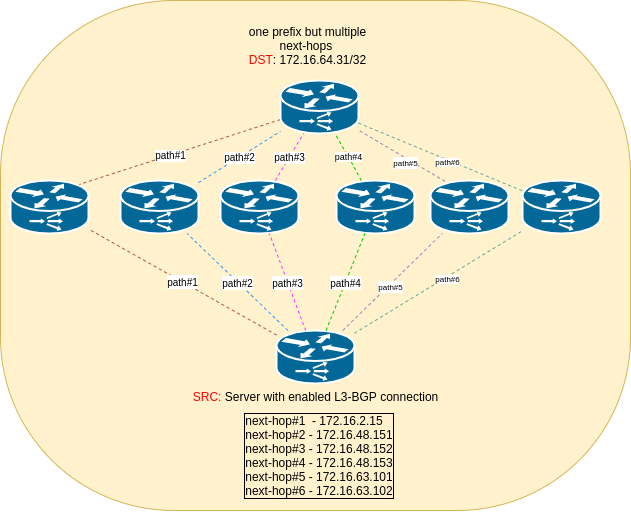 Due to the unremedied SONiC interal bug we’ve implemeted workaround bash script called arp-refresher.sh which is started every 2 minutes in the background via crontab. Stale ARP is not refreshed by SONiC - it takes a hike from bridge (PortChannel) - then the servers in the “old” network are having issues connecting to the L3-BGP-only servers

As you can see from the syslog ARP refresher is doing it’s job properly:

You can see the source code of arp-refresher.sh below:

This interconnection setup is working fine for over 2 months. We have critical services deployed on the servers that are prone to any distruption or latency-spikes in the network. After implementing ARP refresher SONiC works well for the setup described above on the Broadcom Tomahawk, Tomahawk II and Trident III ASICs.